skip to main | skip to sidebar

Steve Bohnemeyer and I hit the Stilly yesterday looking for coastal cutthroat. We chose Thursday as it appeared to be the last day of sun before the next Pacific storm hit. We chose well. Cool in the morning, we fished from the sunny side of the river. At the first spot, a place I've only fished for pinks, we found nothing but dinks. Went downstream and found nothing. Headed upstream from Arlington to the North Fork.

The water was clear and cold, the sun high and bright with some salmon broaching and a few cutts rising. Steve broke the ice with some cutts on a black spider. I missed a couple on a Percolator--they ignored the Elk Hair Caddis. A soft-hackle or mayfly emerger would have been a good bet, but they were resting quietly at home. I've been tying some 3-4" long flashabou baitfish patterns but needed to test them to make sure the fibers wouldn't wrap around the hook shank. One cutthroat took the pattern to task. Switch over to chartreuse clouser that Yakima River smallmouth love, as did one cutthroat. Switched to black reverse spider that got bit by a coho. Suddenly it was game on! While trying to get it to pose for a couple more photos, it decided to favor the other side of the river and took my only black spider with it.

Steve loaned me one so the catching continued. Not a lot of fish, but enough to keep us casting and exploring the next riffle and run. Just the way it should be on a stunningly beautiful day.
Posted by The Fishing Writer at 8:25 PM

Hit the water about 4:15 pm on a rising tide down at Johns Creek in Mason County. Heard the fish were in and indeed they were. 9 guys with bait casters and 1 slinging the same gear, but with a fly rod were lined up to intercept the chum as they headed towards the creek. Some fish were around as clearly disclosed by the crashing seals and the frequent "happy jumper." One gear guy had two salmon and a broken rod. About half of the gear fishers had beached fish, but the fish were pretty much keeping their mouths closed. Gear dudes left.

Here's the gear setup. 3 inches of pencil lead, a 3-4 foot long leader, with one orange and one chartreuse small corkie and a bare red siwash hook. Cast, let it sit and wait for a chum to swim by and pick up the floating corkie.

I took a bunch of photos, including a quick video of the guy explaining about the broken rod. Such a pretty day, then the sun dropped low into the magic hour--that's the early morning and late afternoon hour when most movies are filmed--took a bunch more photos. No fish were showing.

As the tide turned and started to drop, the fish appeared. Had the whole place to myself--just me and the big dog on the end of my line. Several jumps, some runs and some minutes later, the dog was released back to the pack. Next cast, another fish. There went the fly line, got it back on the reel, there it went again into the backing, got it back, there it went again into 20 yards of backing. Did not land this one--the leader broke when I had the fish snubbed down tight. You see, since I really had trouble handling this fish with a 9 weight and since I was fishing two flies, thought maybe I was dealing with a double.

The fly was much like an orange comet--short, silver diamond braid body, orange crystal chenille, couple turns orange hackle and silver plastic bead chain, fished on a floating line. It was the tail fly, the head fly was much the same, but in pink. They left pinkie alone.

The fish are already colored-up so go now.
Posted by The Fishing Writer at 10:35 AM

17 Northwest Fly Anglers and guests got a taste of saltwater beach fishing on the first saltwater mentoring outing led by me. With tips and tactics fresh in their minds from the Saltwater Beach Fishing PowerPoint presentation I gave to the club three days before, we hit the beach looking for resident coho and coastal cutthroat. Alas, only one of the targeted species actually attached itself to a fly. The fish were there--sometimes within casting range, more often moving fast and far off. We did get into some pretty darn big sculpins and when learning, any kind of positive result makes for a successful day.

We pretty much caught a break from all the heavy rain plaguing Puget Sound all month. One heavy shower (more water than was coming out of the shower head at home) prior to the appointed meeting time and one after we finished lunch and got the gear all packed up.

After lumch a few of us drove to another local beach and dispite not seeing any signs of fish, found a few coasties on an incoming tide. Chartreuse over white clouser, sparsely dressed, 3xl #8 worked. Didn't try any topwater stuff as no fish were showing.

Waders are going back to store--wet to the knee in one leg and to the hip in the other.
Posted by The Fishing Writer at 3:52 PM

Northern pike in Washington? Yep, they are here and their numbers are exploding. Some goofball transplanted them into Newman Lake, but that's not the real concern. They have established themselves as the top predator in the Pend Oreille River.

At yesterday's Inland Fish Policy Advisory Group meeting in Ephrata, Bruce Bolding of WDFW outlined the facts. In summary, northern pike, flushed out of the Clark Fork through the Lake Pend Oreille and over Albeni Falls Dam, have found the Box Canyon portion of the Pend Oreille River to be a lovely home. To get some sense of the numbers, in 2004 there were roughly 400 adult pike in the river. In 2009, that number mushroomed to 7500. At the same time, the numbers of the resident fish populations, (save one) have shown marked decreases.

Initially the biologists thought the fish were confined to the southern half of Box Canyon. Not so as the fish have moved downstream into Boundary Pool as well. In a recent bass tournament on Boundary Pool, every angler caught pike.

So what's the problem you might say? Impact on native fish and salmonids in particular. Over the next number of years, roughly $500 million will be spent improving fish passage over Boundary, Box Canyon and Albeni Falls dams and restoring native cutthroat and bull trout populations. A future concern is further spread downstream into the Columbia River and the potential havoc to be wreaked on salmon and steelhead populations.


These fish present a terrific catch and keep fishing opportunity as there is no limit and no minimize size. Forget the catch and release ethic (this coming from the guy who released all but one pink salmon last year), every one says pike fillets are quite tasty
Posted by The Fishing Writer at 10:05 AM

9th Circuit Court of Appeals has ruled that logging road sediment is point source pollution when it enters a stream. That calls into play the Clean Water Act with the requirement that permits must be obtained from EPA under the National Pollution Discharge Elimination System.

Expect the decision to be appealed and expect the timber industry to lobby for legistative exemption from the Clean Water Act.

All those interested in salmon, steelhead and resident trout recovery should take steps to educate their federal legislators on the wisdom of resisting easing road construction standards.

There are two basic choices for dry line fishing--weight forward
and double taper.
I'm a big fan of the double taper for several reasons. Most fish are hooked pretty darn close to the angler so long casts are not necessary and usually counterproductive. Long casts take more time so the fly is in the air and never in my 50 years of fly fishing have I ever caught a fish in the air. Long casts are tough to control once the line is on the water. Long casts may scare all the nearby fish. The list goes on.
Perhaps the coolest thing about double taper lines is, when one end gets trashed from use, you simply strip the line off the reel and reverse it. Viola--a new line without spending more money.
Posted by The Fishing Writer at 12:42 PM

Had a couple of meetings in Ellensburg a few days apart so it made sense to hit the river afterwards. Ran from Ringer to MP 20 late Saturday afternoon as my fishing partner wanted to break in her newly-acquired boat (one of roughly 20 in her personal stock). Fortunately we were behind most of the innertube hatch so we had the river to ourselves except for one guide from Red's. Took most fish on a #14 McKenzie Special (a caddis imitation).

The next drift was from Umptaneum to Mahre's. Fished with JR Rodriguez of Evening Hatch as part of a Washington Water Trust event. Great guy--knowledgeable and enthusiastic. Fish took a variety of flies so no real insight for what to use during the bright sunny conditions we experienced.
Posted by The Fishing Writer at 8:48 AM 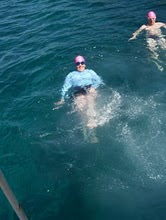 Heard a great story on NPR this morning about an English Channel swimmer. Now that's perserverance, determination and a whole lot more.
Posted by The Fishing Writer at 8:44 AM

The Northwest Fly Anglers outing on the lower river (Benton City to Horn Rapids and Snively to Hyde Road) was a great success. Everyone caught fish,, the weather cooperated, and the river was in great shape. The right fly surely helped. One of my fishing buddies who shall remain unnamed in this post, was mostly having casting practice. She picked up my rod while I was shooting pictures, and hooked up on the first cast. If you want to know more about where to launch, what to use and when to go, give me a shout.
Posted by The Fishing Writer at 3:16 PM

Gave my Sagebrush Bronzebacks media presentation to the Alpine Fly Fishers last night. Wonderful, high energy club that meets in Puyallup on the 3rd Tuesday of each month. Check them out at www.alpineflyfishers.org.

2010 is shaping up as a low-water year which means the Yakima River could be in fine shape for smallmouth bass fishing in May. I'll be on the river May 14-16, 2010 leading an outing for the Northwest Fly Anglers (www.northwestflyanglers.org) .
Posted by The Fishing Writer at 1:39 PM

The Fishing Writer
First fly-caught fish was a trout on a Brown Bivisible 50 years ago. Aside from some years foolishly spent playing golf, I've been fishing ever since.